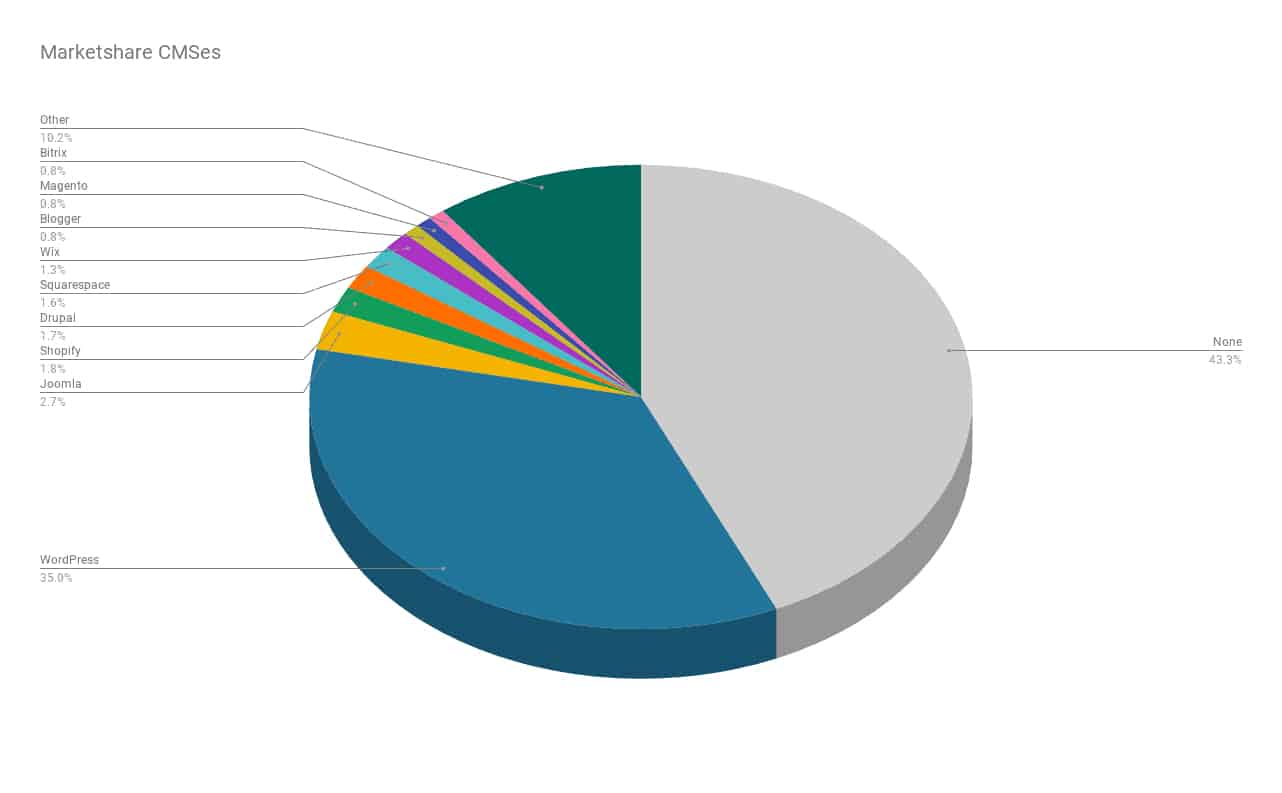 I wrote an analysis in the beginning of this year of the CMS market share numbers from W3Techs. Over the year I’ve been analyzing them a bit more and I thought I’d share my insights with all of you. So, read on to see when Shopify is going to replace Joomla as the second biggest “CMS”, when Wix is entering the top 5 and why all of their growth pales in comparison to WordPress’ growth.

First, let’s look at the raw, most important numbers as of November 2019, from this table that W3Techs maintains:

Notes about these numbers: the W3Techs research I’m analyzing in this post is based on the top 10 million sites on the web as provided by Alexa. While some platforms like Tumblr and WordPress.com are huge, they won’t show up as high in these rankings because the individual subdomains are not considered separate websites by W3Techs.

Most of this visible (in its relativity) in this chart:

But this is only interesting if you look at the trends. I’ve made this Google sheet with the help of my colleague Jono Alderson, which takes the data from W3 Techs and adds more info. So let’s dive a bit deeper.

Shopify is clearly on the rise, and doing well. What’s not so clear is that WordPress, in large part, is also doing eCommerce. W3Techs actually has a report on WooCommerce, but they classify it, rightly, as a sub-category of WordPress.

If you look at the W3Techs WooCommerce report though, you’ll see that an astonishing 5.5% of the websites in this research are powered by Woo. That would put WooCommerce firmly in the second spot of CMS market shares if it was classified as a separate CMS and ahead of its main contender Shopify by 3.7%.

WooCommerce is almost 3 times as big as ShopifyClick to Tweet

What if these trends persist

If these trends continue in the same linear direction, this time next year, Shopify will be the #2 CMS in the world. Joomla will drop to the #3 position. Squarespace will be the new number #4 and Wix #5, at the expense of Drupal, which will drop from #3 to #6 over the course of the year. Combined this leads to the conclusion that outside of WordPress, all major open source CMSs are losing.

What we have to realize here is that 0.1% share of the CMS market maybe tiny for WordPress, but for SaaS providers like Shopify, they represent huge growth in customers and revenue. Shopify builds (the name does give it away) shops. Each and every one of these customers makes them money. Money they can reinvest into faster growth. I did some more research into the money these CMSs make in my previous analysis of these numbers earlier this year.

Are so many sites changing their CMS?

What’s important to note is that some of the changes in popular CMSs maybe due to the ever changing growth of the web, as is reflected by the Alexa top 10 million most visited sites. For instance, a CMS like TYPO3 is relatively large in countries like the Netherlands and Germany, where the web has been big for many years. If the relative size of these countries on the web shrinks due to the fact that the overall web is growing faster than the internet usage in these countries, sites will drop out of the top 10 million, and those CMSs might thus look like they’re declining. They might actually be stable or might even still be growing, just not as fast as the entire web.

I’ve gone through the list of CMSs and looked up whether they’re open source or not. On the whole, in the beginning of 2018, open source CMSs combined had a 41.6% market share. Now they command 43.4% and if the trends continue the way they’re looking, it’ll be 45.7% this time next year.

So, while WordPress is shining and growing, the open source CMS ecosystem outside of WordPress isn’t getting stronger. We’ve seen the first moves for Gutenberg to be adopted by Drupal, maybe it’s time for more collaboration to prevent further decline?

The top 10 is a list of names we’ve seen for a while now, relatively speaking. It’ll be very interesting to see whether any other new systems pop up over the next year. Big online players like MailChimp and Salesforce have launched new CMSs, they might use their reach in other areas to grab a bit of this market share.

It will be very interesting to analyze this trend over the coming years, and I plan to keep doing so on a regular basis. If you have feedback on specific things to analyze, questions, or other remarks, please leave them in the comments!

An internet entrepreneur from the Netherlands, Joost is the founder of Yoast SEO, speaker, and investor for companies in the digital space.