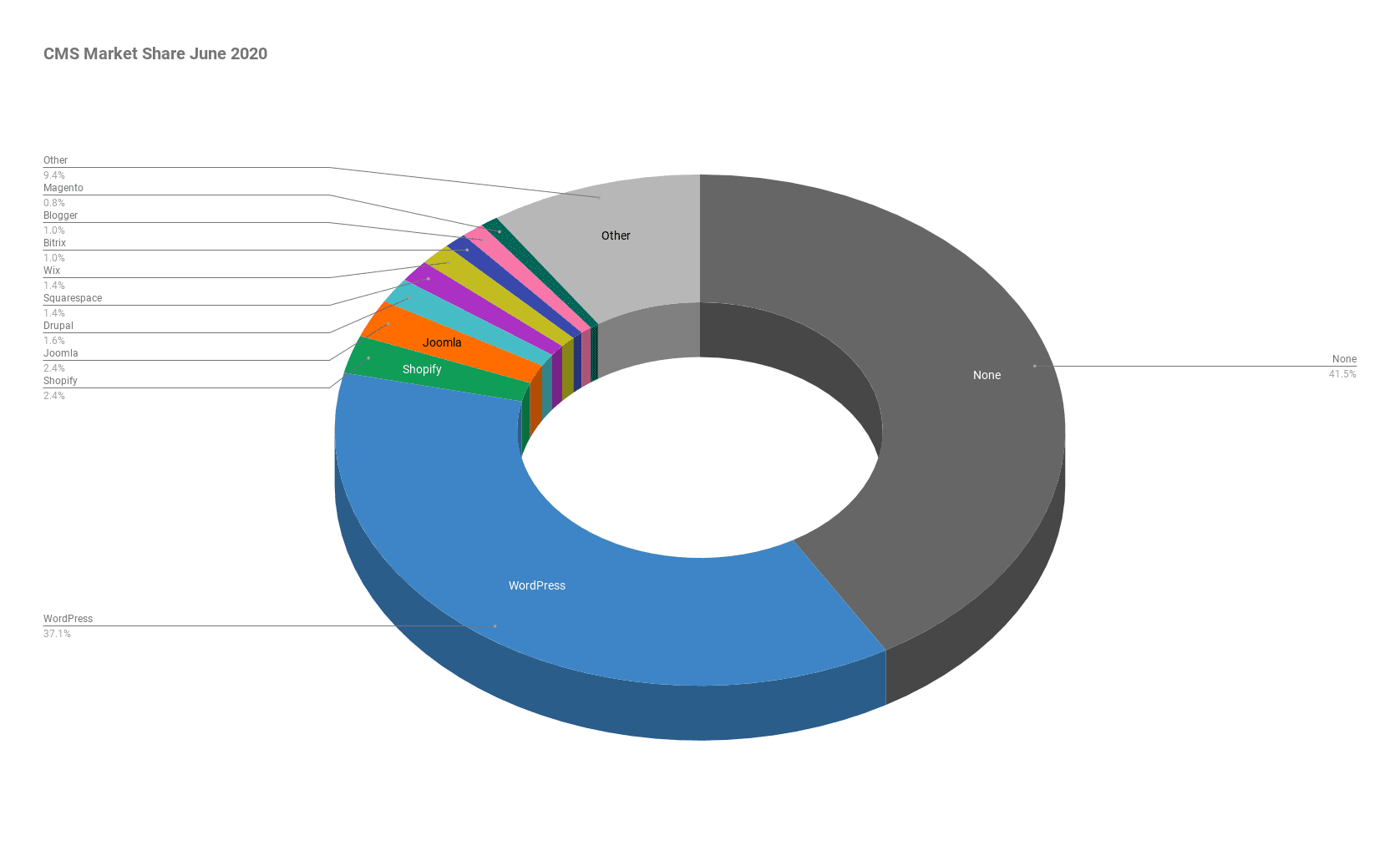 First, let’s look at the raw, most important numbers as of June 4th 2020, from this table that W3Techs maintains:

Notes about these numbers: the W3Techs research I’m analyzing in this post is based on the top 10 million sites on the web as provided by Alexa and the 1 million list provided by Tranco, see their notes on technologies. While some platforms like Tumblr and WordPress.com are huge, they won’t show up as high in these rankings because the individual subdomains are not considered separate websites by W3Techs.

Most of this visible (in its relativity) in the chart below. Note that we’ve taken out WordPress as otherwise the trends for the other CMSes are so minuscule:

Over the last 35 days, since May 1, WordPress has added 1.1% market share. If you consider that the #2 and the #3 CMS in the market both have a share of approximately 2.4% in total, WordPress adding almost half of that over the course of just over a month is incredible.

Of course we can only speculate as to the reasons behind this growth, because the data doesn’t show this. I do see that more and more businesses, both small SMB’s as well as larger corporates, choose WordPress as their “to go” platform when they need to create sites, due to the ease of use, price and quality of available tooling and hosts and the wide availability of developers.

eCommerce on the rise

As a result of COVID-19, more people have been buying and selling things online. As a result, eCommerce is taking up a quickly growing portion of the top sites. Together the two main eCommerce platforms, Shopify and WooCommerce, have risen quite hard. They seem to be on somewhat similar growth paths, although Shopify is growing faster than Woo. Note that the very simple forecast models we’ve used don’t take the world’s current situation into account, and thus aren’t very reliable.

Next to the incredible growth these two platforms show, one of the interesting bits about this is the eCommerce systems that are not growing right now. OpenCart saw a slight positive uptick, for PrestaShop the current situation seems to have accelerated its demise. I would have expected BigCommerce to “profit” more from this situation, but their market share isn’t moving, and neither is Magento’s.

As always when I look at these numbers, it’s a bit bittersweet. I love to see WordPress grow its CMS market share so fast. It’s my website platform of choice and I spend a lot of time with our team at Yoast and with the wider community on making it better. But other open source projects are losing, some of them are losing fast.

An example near and dear to my own heart, is TYPO3. It’s a community I love, but unfortunately it’s losing market share faster than ever before, now at 0.3%, which is down 0.3% from 6 months ago. That’s 50% of its market share over the course of just 6 months. What I said about that in November remains true, this might be regional effect, but fact of the matter is, if you become too small for people to consider you a contender, you’ve lost.

In November I wrote about new contenders coming into the market, Salesforce & Mailchimp amongst other ones. So far, none of them have gotten to a CMS market share where they’re noticeable in these charts yet. Which shows that this isn’t an “easy to win” market. I think many people underestimate the CMS market. Lots of developers end up writing their own CMS as though it’s a rite of passage. Turns out that when you have to get people to use your CMS, it’s a lot harder. WordPress has reached critical mass in multiple ways and is on its way to 50%, maybe even within the next two years.

I imported all this CMS market share data from W3Techs into a Google Sheet. The sheet, including some of my highlights and forecasts is public and you can view it here. I’d love to hear what else you see that strikes as odd or needs attention. So, have questions for me on this data? Things you want to point out? Let me know in the comments!

Joost is an internet entrepreneur from Wijchen, the Netherlands. He is the founder of Yoast, and currently the Head of WordPress Strategy for Yoast’s parent company Newfold Digital. Joost is married to Marieke, Yoast’s Chief Growth Officer and its former CEO. Marieke and Joost have 4 kids together and run Emilia Capital together, an investment firm.